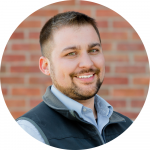 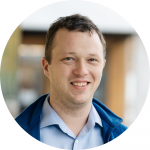 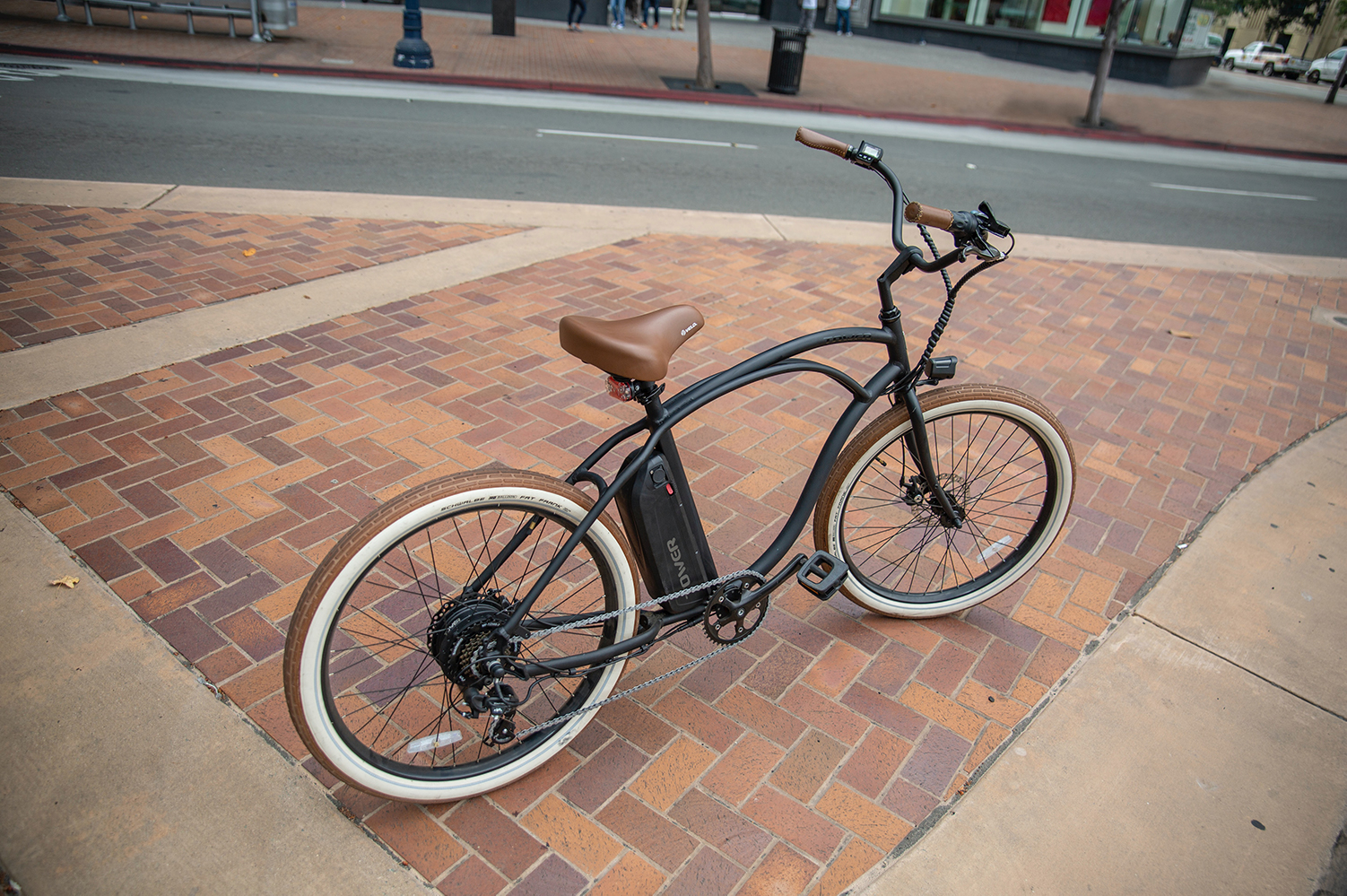 RSGers love biking. Many also count themselves among a small but growing number of e-bike enthusiasts.

RSG’s Chris Scelza and Orian Welling both share a passion for e-bikes, though their interest has taken them down different paths. Chris is a skilled hobbyist who has built his own e-bike, and Orian is an avid e-bike commuter.

Sales of all bikes grew during the pandemic as many began recreating outdoors, but the e-bike industry stands out. Multimillion-dollar investments in e-bike startups are on the rise as new companies emerge to tap into the growing market of enthusiasts.

The hobbyist: building an e-bike from the frame up

Chris Scelza can’t remember when he first heard the word “e-bike,” but he remembers finding a video (like this one) of someone taking apart laptop batteries to construct a custom battery pack for an e-bike.

“That’s when I started my journey with e-bikes,” Chris said. 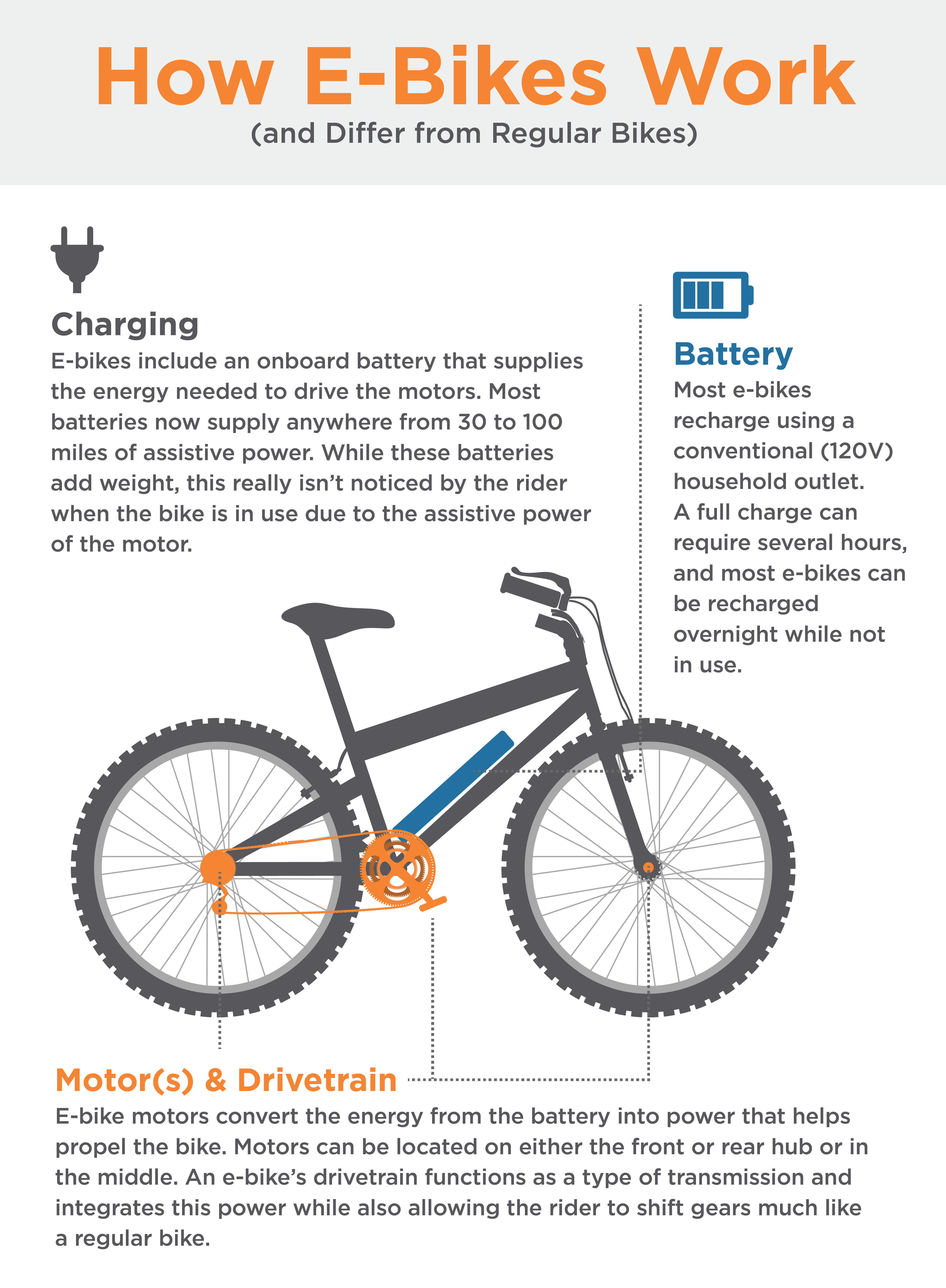 After watching the video, Chris decided the economics of building his own battery pack made more sense than buying one. He set out to build it and purchased a hub motor kit.

In the world of automobiles, so-called “crate motors” make it easier for hobbyists to swap out a motor. Chris’s purchase of a hub motor was a similar approach—just scaled down to an e-bike.

When the hub motor kit arrived, Chris was still working on assembling the lithium-ion battery pack that would form the basis of his custom-built e-bike’s power train. But this would take some time.

So, Chris purchased four 12-volt lead-acid batteries—the type used in computer battery backup units—to get on the road sooner. But it wasn’t all smooth sailing.

Because of the size and weight of the lead-acid batteries, Chris experimented with several configurations. He first positioned the battery behind his bike’s seat, but this raised its center of gravity and affected its balance.

“I hit a rocky patch on a rough trail, fell off, and broke my collar bone,” Chris said when recounting his first ride.

The crash convinced him he needed to finish the upgrade to the lighter lithium-ion batteries to decrease their weight. With new batteries, his second attempt succeeded, and his e-bike no longer had a balance problem.

While Chris doesn’t use his e-bike to commute, he does enjoy using it to recreate.

Chris has modified his e-bike to include an additional seat so he can give rides to his son on a local trail near his home. “Personally, it’s nice having a mountain bike that can go off road,” Chris said.

Recently, Chris salvaged an old scooter from his local transfer station. It was in good condition but missing a battery. He plans to electrify the scooter before winter.

The commuter: replacing a personal vehicle with an e-bike

Orian Welling’s interest in cycling and new technologies started at a young age.

“I commuted by bicycle in middle school—10 miles each way,” he said while recalling his early interest in cycling.

Around the same time, Orian’s parents founded the Midwest Renewable Energy Association, which hosts an annual clean energy fair. This exposed him to all types of electrified vehicles.

Orian’s interest in cycling and alternative energy technologies continued into adulthood. He went on to receive his undergraduate and doctorate degrees in engineering. And while living in Boston after school, he commuted using a regular bike.

But when Orian moved to New Hampshire, his new 14-mile commute took almost 2.5 hours each day. As a parent with a toddler, this wasn’t workable.

So, he reached out to a friend who owned an e-bike to ask about it and ended up purchasing it from him. The e-bike made Orian’s commute by bicycle doable, requiring just 30 minutes compared to 25 minutes by car.

“I really only drive when there’s something else I need a vehicle for such as getting groceries,” said Orian. “I feel like I can get by with an e-bike for most everything. I also feel better through the day when I get a chance to exercise.”

Orian said his e-bike gets around 25 miles of full-assistive power during the summer. While this is almost enough power for a round trip, Orian would recharge at the office when it was open.

To maximize its use year-round, Orian has equipped his bike with studded tires. He has also attached a child seat to the back, which allows him to transport his daughter, Esmei.

Orian used his e-bike to commute to work when offices were open. Pictured here is his bike after dropping his daughter off on the way to work last winter.

When asked what advice he’d give to others looking to commute via e-bike, Orian said that an e-bike will improve the commuting experience for those who already enjoy commuting via regular bike. But he emphasized that it won’t necessarily make converts out of all.

“It still takes physical effort, and you still deal with rain and hot days and cold days—the main benefit is it takes less time,” said Orian. “If you don’t enjoy commuting by regular bike, then you’re probably not going to love commuting by e-bike either.”

In a 2019 report, Deloitte cited impressive figures for e-bikes. They projected 130 million e-bikes will be sold globally between 2020 and 2023. In the Netherlands, e-bike sales have already eclipsed standard adult bike sales.

In anticipation of their continued growth in the United States, the Bicycle Product Suppliers Association and PeopleForBikes have written model legislation. Since 2015, at least 22 states have used it to create a uniform regulatory framework for e-bike users and manufacturers.

This framework creates a three-class system for e-bikes based on the bike’s motor and top speed and governs where the bikes can be used. As Chris and Orian noted, these motors are what take some of the effort out of e-biking, increasing their appeal as a mode for errands and work trips, especially among older adults.

In fact, a recent study conducted by researchers at the Institute of Transport Economics in Oslo, Norway, found that e-bike users slowly reduce the number of daily vehicle miles traveled. Importantly, the researchers found that this effect increases over time, which eliminates the possibility that it is only the mode’s novelty driving these reductions.

Many of RSG’s travel surveys also now differentiate between regular bikes and e-bikes when asking about respondents’ modes. The latest wave of our COVID-19 Transportation Insights Panel asks respondents whether having access to an e-bike would change their decision to travel by transit or car.

Whether respondents who are neutral switch to agreement may depend on how quickly the technology takes off. This is because exposure to e-bikes is often a key factor in adoption rates.

For those who don’t know anyone with an e-bike and aren’t sure whether they want to buy one, Chris suggested asking around or checking out local tourist destinations. These locations may offer e-bikes for limited use as rentals.

“Just try it out,” said Chris. “I promise you’ll get hooked.”

Editor’s note: Batteries present a fire risk. Individuals without proper training or experience should not attempt to construct a battery pack on their own.