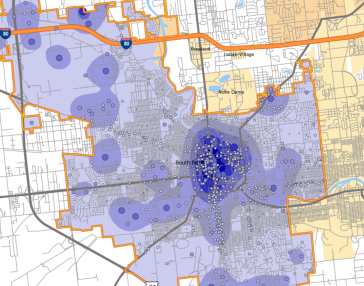 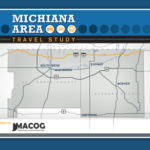 The model structure is built upon similar hybrid models for Evansville, Indiana, and Knoxville, Tennessee. A genetic algorithm was used to estimate the model’s parameters simultaneously from both MACOG’s rich traffic count database and a new household travel survey conducting by RSG.

MACOG also asked RSG to build a new land use model that integrates econometric modeling techniques in TransCAD with the GIS and 3D visualization functionality of CommunityViz. Planners are able to develop land use scenarios or the model can be run to predict the likely land use that would result from various zoning and infrastructure policies with spatial discrete choice models. This system results in both static, repeatable estimates of zonal population and employment, as well as a probabilistic allocation of buildings at the parcel level, which can then be visualized in 3D.

RSG also performed web-based household and university travel diary surveys for this project. The household travel diary survey sample was selected using an address-based sampling (ABS) frame, which provides the best coverage of the general population and also parallels the NHTS recruitment strategy. The surveys provided a statistically valid and proportionally representative sample of households from within the entire survey study area.