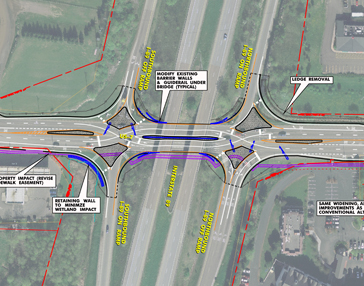 The US-2 / US-7 corridor, near the I-89 Exit 16 interchange in Colchester, VT, is a key commuting arterial that connects Burlington, Winooski, and Essex Junction to points north. Over the last few decades, significant new development has combined with existing pressures to create excessive intersection congestion during peak hours throughout the corridor. As a result, the corridor faces the challenge of providing bicycle and pedestrian resources in an increasingly urbanized environment, while enabling further growth and development in the area with increasingly scarce funding for the necessary infrastructure improvements.

With input from local, regional, state and federal stakeholders, RSG developed a transportation plan based on reasonable and likely growth scenarios. These improvements included consideration for expanded highway infrastructure, transit, and bicycle and pedestrian facilities. The resulting recommendations required significant expansion to the Exit 16 diamond interchange, including replacement of the existing bridge. In an effort to minimize costs, an innovative interchange design, the Double Crossover Diamond (DCD), was presented for further analysis. This alternative, which included provisions for pedestrian and bicycle access through the interchange, was selected as the preferred alternative by the Town and State stakeholders and is currently under design by the Vermont Agency of Transportation.