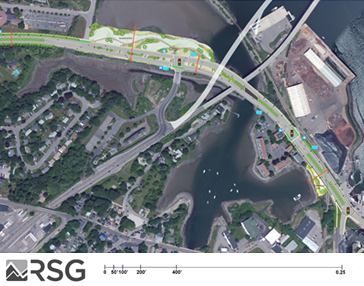 RSG is providing engineering, landscape architecture, design, and public outreach services in support of improvements to the Market Street Gateway in Portsmouth, New Hampshire. Uniquely situated between a major interstate, a functional port, and the heart of historic downtown Portsmouth, the Market Street corridor provides critically important access to some of the City of Portsmouth’s most valued resources, including its waterways, islands, and bridges. Working closely with City officials, the RSG team is seeking to draw visitors’ attention to “view corridors” in order to bring the attention back to the attributes that underpin Portsmouth’s history, form, identity, and continued growth. Of particular concern is making the corridor more pedestrian and bicycle friendly by reintroducing the “human scale” as part of the design and function. As the work progresses, the RSG team will engage in the survey of environmentally sensitive areas, the development of plans for review, the creation of specifications for streetscape improvements along the gateway, and the development of conceptual ideas for street and sidewalk lighting, as well as other corridor amenities, including benches, footpaths, viewing areas, and interpretive signs in the city-owned open space along the waterfront. The project includes the preparation of construction documents and construction phase services.